In Low Light (Music for the Winter Solstice) 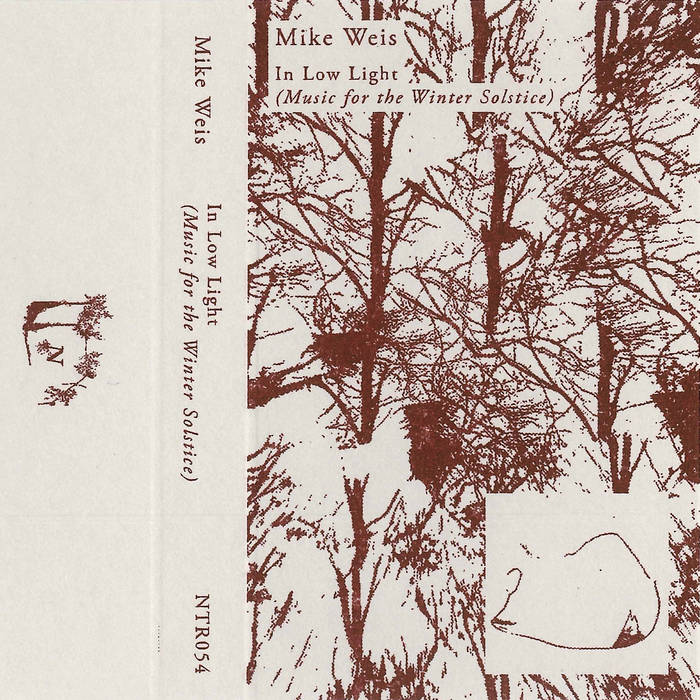 Lost Tribe Sound Been a big fan of Zelienople for some time now, yet it never quite registered how much of that adoration was due to the incredible percussive talents of Mike Weis. Now, I'm even more hooked on his solo work. In Low Light comes off as his most subtle and fleshed out effort yet. Either way, genius is found in all that Weis touches!

We first became aware of Mike Weis through his drumming in Chicago's Zelienople, in which he blended hypnotic, delicate grooves and shimmering auxiliary percussion into the band's unique downcast drone-folk. In recent years, Weis has expanded his exploration into meditation and ritual in music performance, exemplified by this set recorded for the 2018 Winter Solstice. Weis' mix of such unconventional percussion instruments as tongue drum, dholak, and changgo, as well as gongs, bells, and objects, all performed live, is typical in its unerring time, tightly controlled dynamics, and dense yet drifting atmosphere. The music settles in places which aren’t visible upon first sight, and, like walking through a foggy, mid-December field, pock-marked with patches of snow and tufts of brown grass, sounds reveal themselves for a moment of recognition and familiarity, only to recede, vignetted by the enveloping atmosphere. Mike Weis has been deeply admired by Notice since our inception, and In Low Light provides an engaging illustration of his practice.

"I count all the time on resonance. I call on this, you see." – painter, Josef Albers

Soon after the first round of recording was finished I traveled to Indiana to be with family for the holidays. Whenever I visit my in-laws, whose house is nestled in a hardwood forest, I like to begin my mornings with a walk into the woods at dawn. I look for a dry spot near the base of an old Sugar Maple that lives at the bend of a creek (now frozen) and I sit. This time I brought my portable recorder with the hopes of gathering some field recordings for this project. I sat in complete stillness, just listening. Ten minutes, 20 minutes, 30 minutes but all that I heard was a few singular sounds widely spaced apart – woodpeckers drumming out call-and-response rhythms on hollowed out Ash trees from across the ravine, one Blue Jay siren, the tussle from a scurrying chipmunk through a mess of brittle Oak leaves, a few quick chirps from a Cardinal couple, a jet passing overhead super high beyond the clouds, a barely audible screech from car brakes in the distance, the low drone of a freight train engine and the bells of a railroad crossing. Other than that, I realized that I was mostly only hearing space and air. The playback on my recorder was nearly blank that I wondered if I even hit the “record” button. This is such a contrast to what this place will sound like in April when the wilderness wakes up. During that time of year, it’s a cacophony of life re-emerging into action and an explosion of color popping out of the ground and from the buds of these now barren grey twigs. But now nature seems to be observing a silent retreat before all of this drama begins again. At this moment the woods are spare, simple, spacious and resonant and this resonance scoops me up and holds me for a moment.

The sounds that I formed into these short pieces seem to reflect this experience of this season as the Earth completes its lap around the sun and begins again. Is this simply interpretation after the act or is the creative process unconsciously influenced and conditioned by the extent to which we open ourselves up to our environment? I suspect that this depends on how much we lay ourselves bare to our experiences and get ourselves out of the way of the act of creation to allow for it all to flow naturally. It reminds me of a story I read by the American Zen Priest, John Daido Loori about his experience on a photography retreat with the modern master photographer, Minor White. These were Minor’s instructions to Loori – “Venture into the landscape without expectations. Let your subject find you. When you approach it, you will feel resonance, a sense of recognition. If, when you move away, the resonance fades, or if it gets stronger as you approach, you’ll know you have found your subject. Sit with your subject and wait for your presence to be acknowledged. Don’t try to make a photograph but let your intuition indicate the right moment to release the shutter. If, after you’ve made an exposure, you feel a sense of completion, bow and let go of the subject and your connection to it. Otherwise, continue photographing until you feel the process is complete.”
-MW, 2019

Artwork and layout by E. Lindorff-Ellery

Printed by Will Brady at Registration, Beacon, NY

*if you want to order a bunch of stuff, contact us and we'll work out the cheapest shipping for you.*

Notice Recordings started in Chicago in 2009. We are now based in Kingston, NY, and Columbia, MO. We release experimental and contemporary sound works. Notice Recordings is run by Evan Lindorff-Ellery (NY) and Travis Bird (MO). ... more

Bandcamp Daily  your guide to the world of Bandcamp

Cannibal Corpse's George "Corpsegrinder" Fisher stops by for an interview